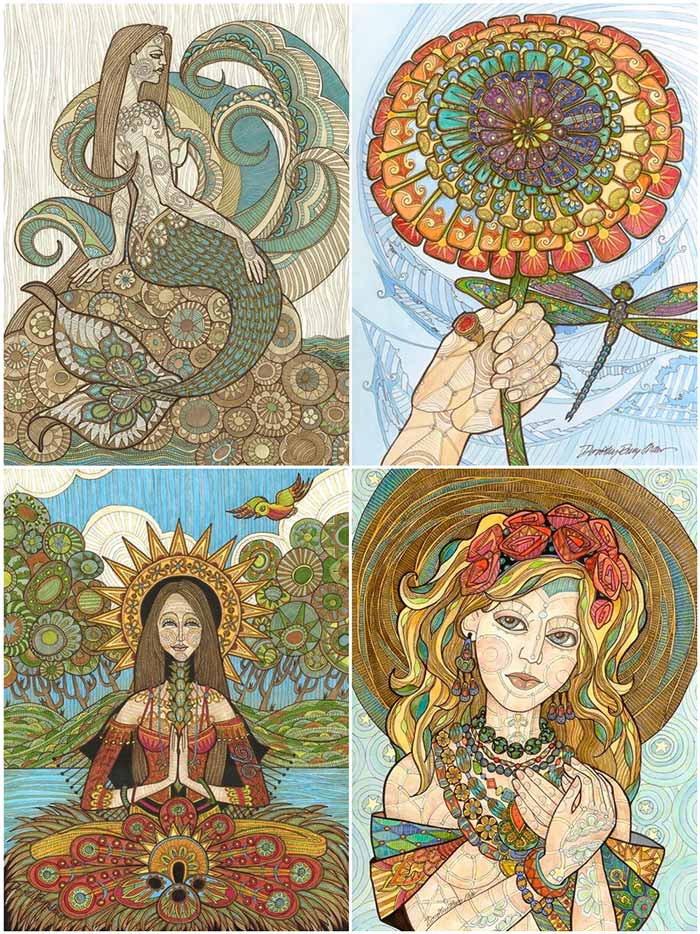 A native Chicagoan, Dorothy graduated from the Chicago Academy of Fine Art.  The academy’s strength was in its esteemed instructors. Most were active in the arts, featured in recent publications, showing in galleries with solo exhibitions and museum shows.  Dorothy soaked up the art culture throughout the city, attending openings and galleries, cloistering herself within the Art Institute of Chicago’s archives in a private viewing room where many hours were spent studying sketches and minor works not on display.  She learned to appreciate all disciplines, all mediums, conventional, and alternate.  In the end, she came full circle with a love for contemporary art.

Dorothy began her art career freelancing in editorial illustration.  For several years her work appeared regularly in Chicago Magazine, the Chicago Sun-Times, the Chicago Tribune, Midwest Magazine, and others. Although gratifying, she came to know fine art was her true calling.

In the years that followed life took her in many directions. There were times of great joy and times of profound loss.  Through it all, she continued to draw. And she began to write.

In 2013 Dorothy’s focus turned at last to creating sacred art, and writing poetry.  What emerged was truly the culmination of a lifetime’s journey, exploring different cultures and religions, from a place of open heart and compassion. Raised Catholic, there was an early introduction into a sacred ritual which seemed to anchor her softly with the ancients, speaking and singing in Latin, a language she would not study until many years later. Chant, repetition, symbolism, and meaningful decoration spoke to her soul, as she knelt in the pew or worked in the sacristy, polishing brass candlesticks and laying out embroidered vestments.  The purity of the metals, worn woods, marble, and lavish textiles, along with scents of incense and melting beeswax swaddled her spirit.

Later, in a seamless transition, the chants she murmured were spoken in Sanskrit, and the embroidery was Tibetan.  Today, still Catholic, she is just as comfortable sitting cross-legged in a temple with hands folded in prayer, the same way they had been since childhood.

By nature, Dorothy has always been a seeker, curious about all religions, and especially focused on the inter-connectedness she found that unified all of humanity. Through the study of the lifework of great teachers, she explored archetypes and myth and drew tremendous inspiration from nature. And it is worth noting, A Course in Miracles has been very influential in her life since 1990.

She describes her spiritual inner life in saying, “Underscoring every backroad of this journey was the steadfast love of the One who gave me life, our God, Love without form, my One and my All.”  Her work is a living prayer, an alchemy of timelessness and mystic truths, a visual chant, an imagery of song.  This is evident over and over again to anyone who is drawn to her art and poetry.